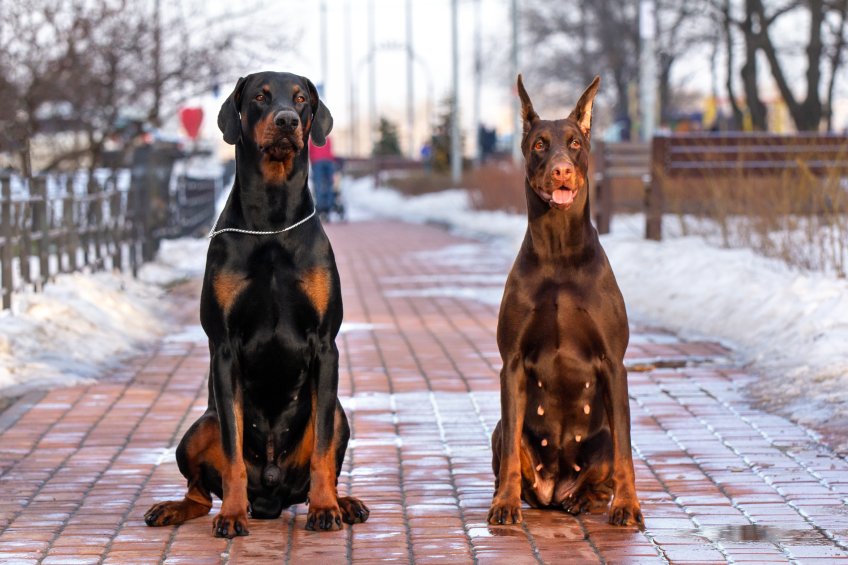 Ear cropping is an elective surgery currently implemented in approximately 20 dog breeds, including Dobermans, Great Danes, Boxers, Schnauzers, and many others. This procedure involves the surgical removal of most or all of the flappy portion of the ear. The surgery may be followed by taping to train the ear cartilage into the desired position. Historically, the surgery was implemented practically for these breeds. However, it is now considered only cosmetic and has been banned in most countries. While still legal in most of North America, there are some things to consider before pursuing an ear crop on your puppy.

To improve their hearing: FALSE.

Ear cropping was implemented in different breeds for different reasons, most prominently hunting, fighting, and working breeds. Some herding and livestock guardian breeds had their ears cropped because it was thought to improve their hearing. This reasoning is not accurate.

Although ears have historically been cropped thinking that the increased airflow would decrease the likelihood of ear infections, this is not the case. Instead, there are a number of genetic, environmental, dietary, and anatomical reasons that dogs get ear infections. Still, studies have shown no positive correlation between cropped ears and a decrease in frequency or severity of ear infections.

Some hunting dogs were cropped to prevent their prey, whether rats, bears, cats, or boars, from getting ahold of the dog through an easy purchase point. Guardian breeds for livestock were also thought to benefit from this, preventing wolves and coyotes from getting an easy hold on the dog. This was also the thought for cropping war dogs and fighting dogs. Anyone who has even had a dog with an ear injury can attest that ears bleed like stuck pigs and are a common location for damage, especially in dog fights.

Historically, many guard dogs’ ears have been cropped to increase the intimidation of their appearance, making them more reminiscent of wolves.

Most of these historical reasons have been disproved (improving hearing and preventing ear infections) or are no longer applicable today. Dogs of war have been predominantly shifted to the shepherd family, including malinois, GSDs, and Dutch shepherds whose ears generally stand naturally. Dogfighting is illegal, and the most common dogs used for hunting and chasing down prey are hounds whose long ears serve an important role in scent trailing. Although some dogs have portions of their ears removed later in life after a few injuries, this is usually in response to injury or repeat trauma and reactionary, not elective. Whether certain breeds look more intimidating with cropped ears is a matter of opinion. Consider the rottweilers; they are not cropped and are certainly considered intimidating.

Ear cropping is now considered an elective and cosmetic procedure; it’s not necessary. Many countries and breed associations have banned the surgery. Even in Germany, where several of the most popularly cropped breeds and the practice likely originated, it has been banned. It remains legal in the US and the majority of Canada, despite legal battles in several states to outlaw the practice. The American Veterinary Medical Association (AVMA) also does not support the practice or that of tail docking when pursued strictly for cosmetic purposes due to the unnecessary risk to the animal implied with any surgery. However, at this time, both the American Kennel Club and Canadian Kennel Club support the practice and allow registration and showing of cropped dogs.

Ear cropping is a surgery and should only be performed by a qualified veterinarian. Sometimes the procedure is performed at home with no more than a pair of scissors while the animal is forcibly held down. This is painful, cruel, and can have catastrophic consequences, including infection, possible loss of the entire ear, or death. Therefore, serious thought should be given before pursuing an ear cropping. As with any surgery or anesthetic event, it carries significant risks. These risks should be discussed with your veterinarian extensively before pursuing the surgery with a qualified veterinarian.

Going Forward, Things You Should Know About Ear Cropping

Ear cropping typically occurs between 8-12 weeks of age. By this age, puppies are capable of enduring anesthesia safely. Furthermore, waiting much later than 12 weeks means the cartilage has already begun to harden and adopt its permanent shape. Following the surgery, the ears of most breeds and most crop styles must be trained or formed to stand up; it doesn’t happen naturally. This requires special bandaging and bracing and may require bandage changes weekly or more, so be prepared for extra vet visits. The incisions take a few weeks to heal, and then the sutures can be removed. Depending on the method of training or bracing the ears, the puppy can be at an increased risk for ear infections during this time.

Finally, there are multiple styles of ear crop. Know what you want for your dog before the scalpel falls because there is no do-over in most cases.

There are vets in most states who still provide this service. These veterinarians desire to see ear croppings done correctly and with as little pain and distress to the animal as possible. Any surgery is painful, and proper veterinary care can help mitigate this and the risk for infection. Do your research, talk with your veterinarian, or seek a few opinions beforehand. If you are considering this surgery for your puppy and would like to talk to the veterinarians at Tier 1 about it, we are happy to discuss the pros and cons, risks, and aftercare with you and evaluate your puppy for surgery. However, we do not provide ear cropping at Tier 1.

Tier 1 Veterinary Medical Center in Palmer is Alaska’s only comprehensive animal hospital. We are available by appointment, in addition to accepting emergencies and walk-ins. With CT, MRI, and Ultrasound available on-site, our facility provides advanced treatment options for your pet. Contact us today to schedule an appointment.

Dr. Paige Wallace is the Urgent Care Coordinator at Tier 1 Veterinary Medical Center. Born and raised right here in the Mat-Su Valley, Dr. Wallace received her education and veterinary training through her service in the United States Army. She served as a Captain with the 218th Medical Detachment Veterinary Service Support, under the 62nd Medical Brigade. Dr. Wallace has extensive experience treating trauma cases in remote areas and with limited resources, bringing a wealth of knowledge and think-on-your-feet experience to the Tier 1 VMC team.