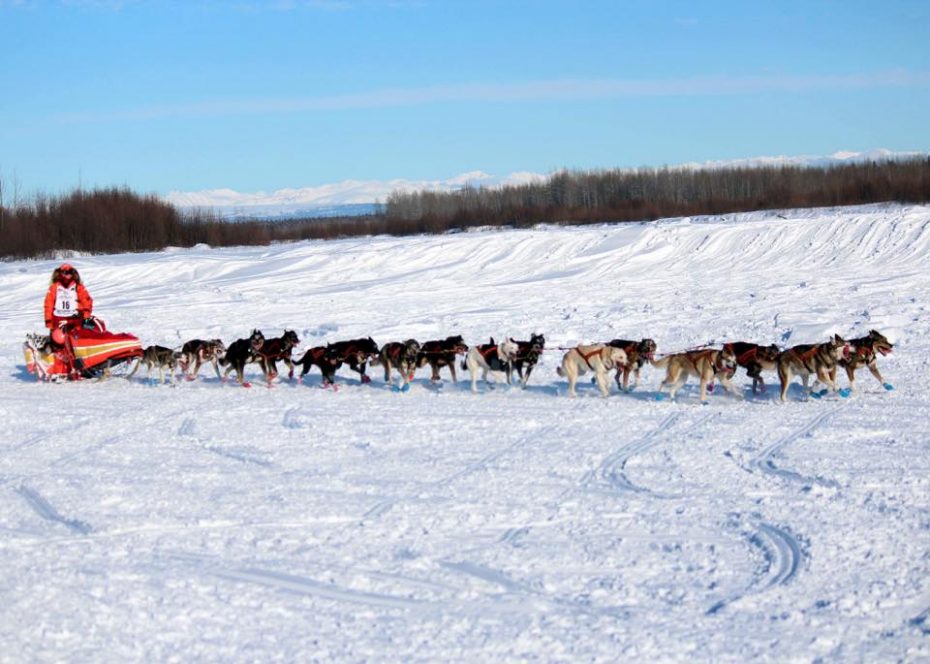 Each year, dozens of mushers journey from Anchorage to Nome with their team of dogs in the Iditarod, a thrilling and strenuous race through the Alaskan wilderness. This 1,000+ mile trek tests the mushers’ fortitude and mental strength, as well as the physical conditioning of their dogs. Meredith Mapes, a veterinary technician at Tier 1 VMC, will be one of the 2020 Iditarod mushers.

Meredith previously competed in her first Iditarod race in 2018. She has been around the Iditarod her whole life, so she knew it was going to be challenging. There were a lot of snowstorms that year, so Meredith and her dogs struggled to get through all of the storms and the mental aspect of encountering such intense conditions. Despite the treacherous weather, Meredith finished the race in 49th place, so she counts that as win!

During the 2018 Iditarod, Meredith learned a lot about herself. She learned that she likes to sleep a lot, so this year she’s going to focus on sleeping a little less and being more competitive. “Maybe I’ll finish in 39th place instead of 49th!” she says.

Training the dogs and preparing them for the race also gets Meredith ready. They’re doing all of the same things in training that they’ll be doing in the race like back-to-back training runs where they sleep for a couple of hours at a time and then wake up to go mush again.

Meredith trains her team to do 40 to 50-mile runs. There are a few checkpoints with 70 or 80 miles in between them, so her team camps partway through to break up those run.

Before the race, Meredith will ship out all the food and supplies that she and her dogs will need for the race to all of the checkpoints. She’s shipping about 1600 pounds of gear, supplies, and food!

Meredith has changed her game plan for the 2020 Iditarod. In most of her races, she’s very strict and regimented about her schedule, planning how long it will take her to run each leg of the race and how much time she will rest in between. For the qualifying 300-mile races before the 2018 Iditarod, Meredith finished between 12 and 47 minutes from when she predicted.

So when it came time for the Iditarod, she calculated that she would finish in 11 days. “But within the first three days of the Iditarod, I had totally thrown my schedule out the window because nothing was going the way I wanted it to,” Meredith remembers. “So this time I’m doing things a little differently. I don’t have a set schedule for myself. I’m just going to focus more on the dogs and how they’re running. We’re going to go out there, have fun, and finish where we finish. Hopefully it’s a little higher than 49th place and it’s not going to take us 12.5 to 13 days, but if it does, that’s going to be okay too.”

Meredith has raised all of the dogs that she will be racing in the 2020 Iditarod from the time they were puppies. She even bred some of her team members, as well as some of her team members’ parents. In 2018, four dogs that she ran belonged to her mentor, Mitch Seavey, and a lead dog belonged to her friend Christine Roalofs. This year, the dogs she will race are all her own!

Although the weather and terrain are unpredictable and constantly changing, Meredith and her team follow the same schedule each day. Her dogs are trained to do 40 to 50-mile runs before resting for 4 to 6 hours. Then they’ll hit the trail again for another 40 to 50 miles before another 4 to 6-hour rest. The rest time depends on how long it took them to do their last run. If the run lasted for 6 hours, they’ll rest for 6 hours. If it only took them 4 hours, they’ll rest for 4. This process repeats itself for almost the entire race.

The only times Meredith strays from this schedule is for the mandatory rests required by the race. The mushers must take an 8-hour rest at a checkpoint on the Yukon River and another 8-hour rest at White Mountain, which is 77 miles from the finish line. The third mandatory rest is for 24 hours at a checkpoint of the musher’s choice. In the 2018 Iditarod, Meredith took her 24-hour break at McGrath. She’s considering taking it at McGrath again, but there were several other checkpoints she really enjoyed in 2018 at which she’s thinking about taking her extended rest this year.

Three or four checkpoints have 70 to 80 miles between them, so this requires Meredith and her team to camp between checkpoints. Her camping setup varies upon her mood and the weather. If it’s snowing a lot, she will put her sleeping bag on her sled and try to stay out of the snow that way. If it’s not snowing a lot or if it’s just snowing lightly, she will put her sleeping bag out on the straw that she spreads for her dogs and sleep alongside them.

Most of the dogs’ diet is raw meat and fat. At each checkpoint, Meredith picks up a bale of straw and a box of antifreeze that she uses as fuel for her dog food cooker. When she’s feeding her dogs, she melts snow for them to consume with their meal. She boils the water and then pours it into the cooler with their raw meat and fat before pouring the concoction over their kibble. As the dogs are running, they’re also grabbing mouthfuls of snow along the trail. This process is called “dipping,” and helps them stay hydrated.

Meredith carries water for herself during the race that she ships out ahead of time. As she’s boiling the water for her dogs’ meals, she’ll drop her water bottles into the pot as well to thaw them out. She also enjoys an occasional Capri Sun or Gatorade when she’s craving something with a little flavor. Tang is also very popular at the Iditarod. They previously sponsored the race, so every Iditarod checkpoint has a jug of Tang for the mushers, volunteers, and race organizers. “I always like to follow in the footsteps of tradition and drink some Tang at the checkpoints too,” says Meredith.

How You Can Support Meredith & Her Team

Tier 1 VMC encourages the community to support Meredith in her exciting endeavor across the Alaskan wilderness. You can show your support in several ways. The first is through Mushergrams! You can call 907-248-MUSH (6874) during the race and leave a message for Meredith. The Mushergrams will then be emailed out to the checkpoints and distributed to the mushers when they reach their next checkpoint.

Another way to show your support is by following the race on Iditarod.com and buying their Ultimate Insider subscription. With this subscription, you’ll receive access to videos and live streams from the trail as well as a GPS tracker to keep tabs on your favorite musher — who is Meredith, of course!

Lastly, Meredith’s parents will take over her kennel’s Facebook page while she’s competing. You can comment or message them through the page, and they will deliver the message to Meredith through the in-reach that she carries.

Good luck, Meredith! Tier 1 VMC is cheering for you!

Tier 1 Veterinary Medical Center in Palmer is Alaska’s only comprehensive animal hospital. We are available for emergencies, walk-ins, and by appointment. With CT, MRI, and Ultrasound available on-site, our facility provides advanced treatment options for your pet. Contact us today to schedule an appointment.